We never unhitched the truck during our four day stay at the South Rim. Morning and night, we hiked to the rim from Mather Campground. As usual, Ginger rode like a queen in the jogger, which also carried our coffee and breakfast, or dinner, and the camera, tripod, extra layers, flashlight, etc. Mid day, dogs stayed in the trailer while Steve and I biked or took the shuttle buses around the Park. Not a bad system!

I can’t help but wonder how many tourists left the Grand Canyon with photos of our dogs with the Canyon as mere backdrop. Grand Canyon is more dog-friendly than most National Parks. You can’t take them down into the Canyon but they are allowed anywhere on the Rim Trail. During our daily sunrise and sunset pilgrimages, the dogs seemed to draw as much attention as the light show on the canyon walls. On our last morning, I stepped away to … ahem … use the facilities, and returned to find my family ringed by women … petting my dogs, chatting up my husband, and snapping pics of the whole entourage.

Birds were a definite highlight, with “life” birds ranging in size from the tiny Pygmy Nuthatch to the huge California Condor. Western Bluebirds, White Breasted Nuthatches, Mountain Chickadees, and Ravens were a common and constant presence in camp. Out at the Rim, hawks (Cooper’s, Red Tail), falcons (Peregrine, American Kestrel), Turkey Vultures and more Ravens were the norm. We saw a couple of mature Bald Eagles flying high overhead but our condor sighting was the most exciting. 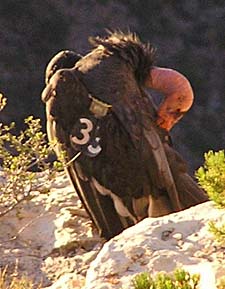 Though Condors are increasing in numbers, thanks to captive breeding programs, they are still endangered and rare. We wouldn’t have noticed “ours” if two women hadn’t stopped us to point her out. She was sitting on the cliff edge, just below the rim, and they thought she was a bald eagle because she was bald! I think they were a mite disappointed to learn that bald eagles aren’t bald but it was mitigated when they heard how special it is to see a California Condor! At a glance we may have dismissed her as a Turkey Vulture, but for the large tag she wore on her wing. Back at camp I did some research and learned that #33 is a 14 year old female, born at the LA Zoo, and released at the Grand Canyon. She is mated to #87 (condors mate for life) and has produced one chick. This year she missed mating because she was sick with lead poisoning, a common problem for scavengers feeding on carrion shot with lead ammunition. Two other breeding females were lost this year due to lead poisoning, but #33 was fortunate. She was captured and taken to a rehab facility in Phoenix where she was successfully treated. Yay!! May you live long and prosper, #33! And may I get better binoculars for that rather momentous birthday that is looming large!

More Grand Canyon photos are available at this facebook link.